Martial Artists of the Faith Worldwide

BBFI was founded by Mr. Rod Crowder in 1985.  He wanted to facilitate the networking of, and serve as a resource to, Christian martial artists.  His effort resulted in establishing what we know today as Black Belts of the Faith International.  Members are able to interact and grow while benefiting from the experiences of each other. Mr. Crowder’s sincere desire to help other martial artists as God led him was truly a fulfillment of God’s calling. In December of 1995, the martial arts community suffered a great loss when Mr. Crowder went home to be with our Father in Heaven.

Fred Murphy assumed the title of president of BBFI on January 5, 1995
on September 1, 2018 Barry Rodemaker became the President of BBFI and changed the name to Martial Artists of the Faith Worldwide "MAFW" and will continue to carry on the BBFI's legacy and mission to spread the Gospel through the martial arts, Mr. Murphy was appointed to the board of advisors for the MAFW and continue to help with our mission. 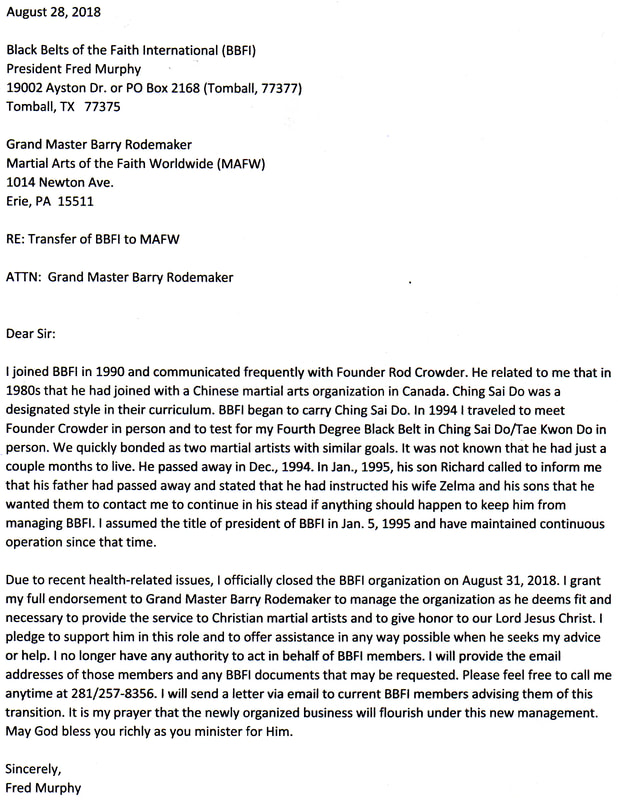